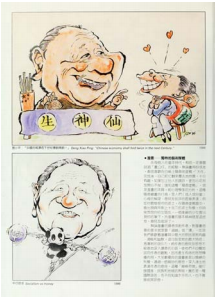 More than 180 pieces of Henry Ho’s art works have been donated to the Library by the artist. Ho’s drawings depict major events and figures leading up to 1997 from the 1980s. They are important research and exhibit materials on the Handover of Hong Kong in 1997. 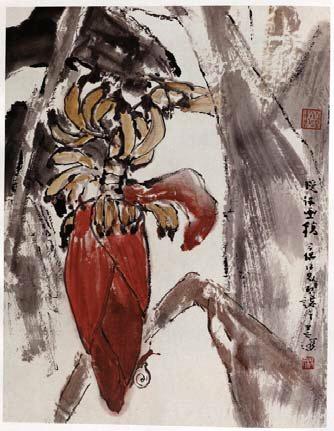 The Richard Charles Lee Canada-Hong Kong Library received a special donation from Mr. Laurence Tam, the Chief Curator of Hong Kong Museum of Art from 1985 to 1993. The donation consists of over six hundred items of books, historical photos of Hong Kong in the 1860s, art exhibit catalogues, magazines, calligraphy, calendars, and brochures. Tam’s donation has greatly enriched the Library collection, especially in the history and development of Hong Kong art and exhibition activities from the early 20th century to present.

Laurence Tam is the former Chief Curator of Hong Kong Museum of Art and the Curator of Hong Kong Museum of Art during 1975-1985. His books include An Anthology of Chinese Ceramics, Chinese Bamboo Carving, Six Masters of Early Qing and Wu Li and The Cradle of New Chinese Ink Painting Movement. Tam is an artist and art educator, who significantly promoted the “New Chinese Ink Painting Movement” in Hong Kong, and founded the In Dao Art Association. He was awarded MBE by Queen Elizabeth II in 1993 for his contribution to Hong Kong art, and since 1993, has been appointed the Honorary Adviser in Art of Leisure and Cultural Services Department of Hong Kong SAR.

Features of the collection

Since the 1960s, Hong Kong Government has been actively involved in art undertakings, building art museums, supporting university art subjects, organizing art exhibitions, sponsoring art festivals, and publishing art books. One of the strengths of Laurence Tam’s collection is its catalogues of art exhibitions that Hong Kong Urban Council jointly presented with the Hong Kong Museum of Art, Hong Kong Heritage Museum, or the Flagstaff House Museum of Tea Ware, during the period of the 1970s to 2009. These exhibitions are mostly results of collaborations with other museums at home and abroad, from East and South Asia, to Europe and North America. The subjects vary from Tibetan Thangka to Japanese Ukiyo-e, from Siwan tea-ware to Rodin’s sculptures. Some exhibition catalogues are accompanied with archival items such as the exhibition brochure, invitation card, research paper on the exhibits, or the curator’s planning notes. After the establishment of Flagstaff House Museum of Tea Ware in 1984, there have been many exhibitions on Chinese tea-ware and pottery as demonstrated in Laurence Tam’s collection. 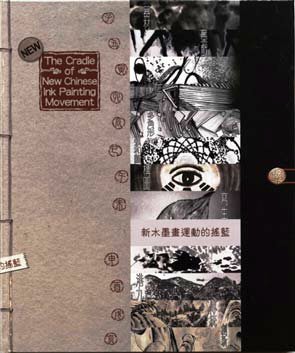 Tam’s donations are very representative. Works of artists from almost every major period of Hong Kong art history and art schools can be seen in this collection. From the early 20th century to the 1950s, Hong Kong became the gathering place for numerous artists from the mainland China and the returning artists who had their art education in Japan, America, France, and other countries. Artists from this period include Huang Boro（黃般若）, Li Yanshan (李研山), Huang Junbi ( 黄君璧), Fang Rending（方人定）, Li Tiefu（李鉄夫） and Huang Chaokuan（黃潮寬）. Since the late 1950s, Hong Kong artists gradually developed their local characters, and their works matured in the 1970s and the 1980s. In the 1950s, diverse art schools coexisted: Lingnan School represented by Zhao Shao’ang（趙少昂） and Yang Shanshen（楊善深） , Haishang School (海派) represented by Wu Zishen (吳子深), traditional artists such as Sun Xingge(孫星 閣), Rao Zongyi ( 饒宗頤), New Freehand Style represented by Ding Yanyong (丁衍庸), and New Ink Painting Movement represented by Lu Shoukun （ 呂壽琨, Laurence Tam’s teacher). By the 1970s, Hong Kong art had successfully integrated western art with Chinese traditional spirit, producing a number of outstanding artists such as Wang Wuxie（王無邪）, Chen Fushan (陳福善), Fang Zhaoling (方召麐) and Li Dongqiang (李東強). In the 1980s, modern art became a dominant trend in Hong Kong art practice. At the same time, Hong Kong’s art development was enriched by a number of Mainland artists immigrated to Hong Kong since the 80s, including Lin Fengmian(林風眠), Huang Yongyu(黃永玉), Xiong Hai(熊海), and Lin Tianxing(林天行). Meanwhile, many Hong Kong artists, such as Yang Shanshen, Li Fuhua( 李福華), Han Zhixun( 韓志勳), Wang Wuxie, chose to immigrate to America, Canada and Australia. Nevertheless, these artists have been actively involved in Hong Kong art activities, and some artists, such as Wang Wuxie and Han Zhixun, have returned to Hong Kong. Tam collection includes works of immigrant Hong Kong artists in North America. Many works in this collection are autographed by the artists or authors.

There are many valuable resources in Laurence Tam’s collection for scholars researching on Hong Kong artists, art activities and cultural development. A number of books, though heavily collected by institutions in North America, can only be found in the Richard Charles Lee Canada-Hong Kong Library in Canada, including A Gift of Heritage: Selection from the Xubaizhai Collection of Chinese Painting and Calligraphy (1992) and Modern Chinese Painting and Calligraphy from the Taiyilou Collection (1991). Some rare editions, such as Ng Po Wan Oil Painting (1970), only a few research libraries have holdings.